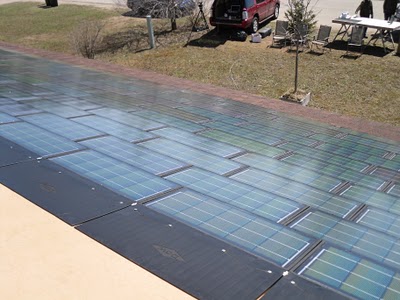 Solar energy is among the best alternatives to replace conventional power generated by power plants employing fossil-fuel. This is because solar power is a renewable form of energy, does not cause pollution by emitting dangerous greenhouse gases that are considered responsible for global warming and climate change and is also much cheaper than conventional electricity.

Out of several types of equipments available for generation for solar power, solar shingles are gaining in popularity these days compared to solar panels. This is because they can be erected directly on the roof the house. Although many engineers consider solar power technology is still in the developmental stage, solar photovoltaic technology is being adopted by many companies to produce solar power systems on a commercial scale.

The advantages and disadvantages of installing solar shingles are explained in the following paragraphs.

But first, what are solar shingles?

Solar shingles are devices composed of photovoltaic cells that convert sunlight falling on them directly into electric power. These shingles look similar to conventional roofing shingles or tiles. The major advantage of solar shingles compared to solar panels is that they not only offer all the advantages of solar panels but also are visually more elegant than solar panels.

The PV shingles or solar roof panels can be considered either a good investment or a bad one depending upon the angle from which one looks at the issue.

However, it is more appropriate to consider them as a long-term investment. While installation of solar panels on the roof is quite expensive, the savings on energy costs are sufficiently high to recover the initial capital cost quickly and after certain period of time generate good profits. Solar roof panels can contribute considerably to the reduction of electricity bills as long as they are functional.

As solar shingles are connected to the electric grid, power generation companies are legally responsible to pay the home owner who has installed shingles in his home for the energy supplied to the grid. While company owned public utilities are legally responsible to permit users to supply energy to the grid for a credit, energy cooperatives in the rural areas are exempt from this rule.

However, it is advisable to discuss with the local electric utility company before installing solar shingles. Another type of arrangement of solar shingles makes use of a huge pack of batteries to store surplus energy during the period when solar power generation far exceeds consumption and the power stored in the battery can be utilized to meet energy requirements of the home when power generation becomes less than the usage.

This type of system may facilitate the home owner to store power during the period when the local utility company is facing a power outage. The quality and the amount of solar power generation depend on the extent of sunshine received in the area in which one lives. In this context, it is educative to understand the success story of solar power generation in Germany, a country not known to receive bright sunshine all through the year. 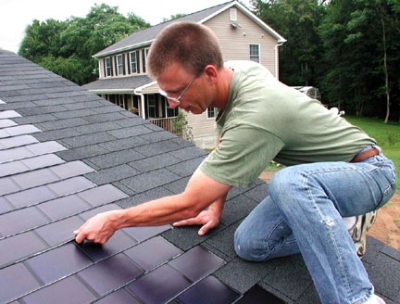 Although the local energy crisis in California had certain impact, the bright sunshine received by the southern part of the state contributes significantly to the popularity of solar energy in that region. Any solar power system has the disadvantage of the need for extra equipment such as a DC to Ac inverter and very intricate wiring of the house. It is better to avail the services of a good electrician for internal wiring, irrespective of whether it is connected to the grid or makes use of a battery pack.

However, sometimes one may face difficulties uncommon to normal grid-connected homes if something goes wrong with the system. Whatever may be the type of system employed, there are certain dangers connected with the hardware, which is a normal feature with all electrical systems.

Although it is one’s personal choice whether or not to install shingles at his home, several factors such as financial condition, location, own convictions and other factors have significant influence in making the decision. All these factors must be carefully evaluated before arriving at a decision regarding installation of solar shingles at one’s residence.