The Sun is a copious source of renewable energy and has lighted our mother earth from time immemorial. However, only lately humans have been able to appreciate the importance of sunshine to tap electric power to light homes and run manufacturing plants.

Solar power is generated by the conversion of heat or sunlight into electrical energy. Unfortunately, only miniscule extent of the available sunlight is being utilized for generation of solar energy mainly due to the absence of viable technology. However, extensive research over the years has led to the development of effective technology to manufacture solar power equipment.

The technology developed so far is much better than before when the sunlight was first recognized as a source of electric power. The slow pace of development is primarily due to inadequate allocation of financial resources for research and developmental efforts on solar technology. There was some improvement during the period when power generation from conventional sources could not meet the demand.

During the peak of oil crisis in 1973, there was an impressive growth in the manufacture of solar panels resulting in a sharp dip in energy costs from $100/watt to $7/watt. However, when there was considerable improvement in the supplies of petroleum and coal, in the beginning of 20th century, the development of solar technology showed a decline. 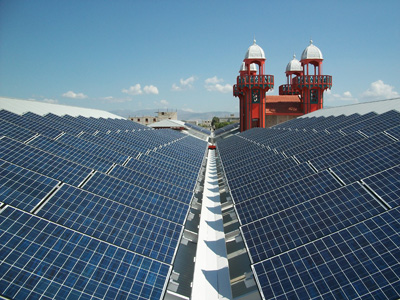 However, there should not be any slackening of efforts in the advancement of solar technology on the false notion that fossil-fuel and other non-renewable sources would never get depleted. Moreover, the use of coal, petroleum products and other non-renewable sources for electric power generation has serious adverse effects on the ecology with emission of greenhouse gases resulting in global warming.

On the contrary, the solar energy generated from the sun is not only pollution-free but also a cheaper, efficient and a renewable electric power. It will be, therefore, comparatively cheaper to utilize solar power to light homes and operate home appliances than purchasing power from the power grid.

The use of solar energy will also reduce our dependence on limited conventional sources of energy. There is considerable awareness among people these days about the advantages of utilizing solar energy both at homes, offices and industrial establishments. If this trend continues, it may not be very far when the use of petroleum products for power generation will be phased out.

Solar technologies are basically distinguished as either active or passive on the basis of the method followed for harnessing, converting and distributing solar energy. Active solar techniques comprise the use of photovoltaic panels (PV) and solar thermal collectors to capture solar energy for lighting homes, running electrical appliances, heating water and many more applications.

PVs can also be utilized for capturing sunbeams and generating energy for heating directly with the help of photovoltaic cells (PV) and solar panels. Indirect or passive solar technology, on the other hand, consists of focusing a large portion of sunlight into a small beam using lenses or mirrors or other tracking devices There are a few large solar power plants in the world.

However, solar energy generated in the world with the available technologies is very little compared to the availability of radiant heat and light from the sun. There is plenty of scope for enhancing the generation of solar energy. A few new areas of generating solar energy are being explored. These include concentrated photovoltaics, thermoelectric and space-based solar energy.

With concerted efforts from the research community and adequate funding, the present solar technology can be updated facilitating the augmentation of the generating capacity to step-up generation of high-quality and cost-effective solar energy.