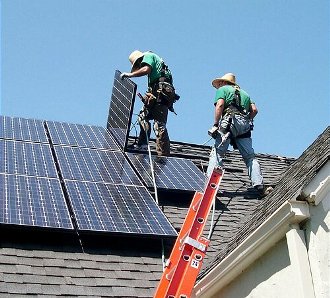 Most people are by now aware that electricity can be generated without using depleting conventional oil reserves. Increasing number of people is also familiar about the harmful effects of fossil-fuel that pollutes the environment leading to global warming and consequent climate change.

There have been concerted efforts by scientists to find alternative sources of power that is not only eco-friendly but also a renewable form of energy. This has resulted in the development of several technologies harnessing sunlight or making use of solar and wind energy.

Solar energy is gaining wider recognition in recent times as it is much cheaper than the traditional electric power supplied by the grid. Solar energy is the conversion of heat or light from the sun either directly with the help of photovoltaic cells (PV) or indirectly by focusing large areas of sunlight into small beams using mirrors or various tracking equipment.

Solar technologies have evolved over the years; with the result the solar panels manufactured at present have become more affordable for people to install them at homes or offices. While some places in the world are ideal for conversion of sunlight into electricity, there are others that are not so suitable.

The generation of solar power using solar panels is not the only solar technology available for harnessing sunlight to produce electricity. Many other unique solar technologies have been developed to tap sunshine for power generation. Scientists have been constantly exploring various possibilities to develop advanced solar technologies that are designed to produce solar equipment that can not only generate cost-effective solar energy but also are more environmentally friendly.

Many solar technologies have been developed by scientists across the world through sheer dedication and hard work. Any of these technologies can be adopted to produce solar power systems. Most of them are inexpensive solutions and the solar systems can be manufactured on a commercial scale. With the result, the solar energy generated is much cheaper than the traditional form of electricity.

Architecture and science have integrated together to develop groundbreaking techniques to generate solar energy that can be utilized for lighting, heating and air conditioning, besides for various purposes in agriculture sector. With the rapid pace of technological developments, soon construction companies for residences, office buildings, apartment buildings and many more will implement new techniques of designs that will customize solar technology.

While developing new solar technologies, there should be a great emphasis on pollution-free, clean electric power. Several new homes have been constructed considering several factors such as durability, economy and appeal without the need to utilize fuel or conventional electrical energy and basing their designs to capture only sunlight and heat from the sun to generate electrical energy.

Naturally available materials used collectively with renewable energy sources, such as the solar power from the sun and geothermal conditions of the earth can be effectively utilized to generate stable energy for homes and all other places.

Photosynthesis and geothermal technologies have become much more potent techniques that people never visualized before as feasible options. Solar energy is much cheaper, pollution-free and renewable form of energy than the electricity generated from petroleum products or coal. People can save considerable amount of money by using solar power in their homes instead of depending on the costly electricity supply from the power generating companies.