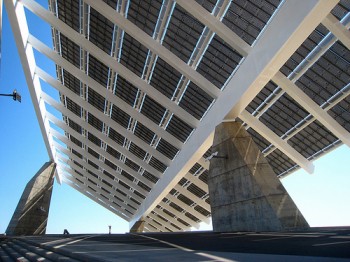 I had a discussion with a friend of mine who is thinking of setting up his own home solar power system. The discussion reached a point where we were talking where to put the solar panels worth over $15,000.

There were many places which were discussed, some of the places were roofs, picnic shelters and carports. As a matter of fact, it is very difficult to locate a place where a bunch of Photovoltaic (PV) panels can be installed.

You need to consider many things like exposure to sun, the condition of roof, vandalism and the space availability on the roof. My suggestion was to build another carport and to me, it seemed to be a good idea. Apart from parking your car, the structure can be used to shield your car from the sun and rain. Now, it can also be used to generate electricity via the solar panels.

In the discussion, my friend mentioned the word “Pergola” which was a new term for me. To me, a Pergola sounds like an Italian opera, where there is lot of water around with a boat and an Italian man singing romantic songs.

To feed my curiosity, I went online and did a search on Pergola. As it turns out, it is a wooden structure usually built on a yard. Initially, I was a bit disappointed that my friend gave the suggestion because we live in a hot and humid area. I could visualize moisture damage on the wood and it needing regular replacement or repainting.

However, I saw some pictures of Pergola which already had solar panels installed on it. It is like something built on heavy timbers and does not have sidings.

If you were to installed PV panels on a Pergola, the following are some of the pros and cons:

All in all, a Pergola can be a good place to set up the PV panels. Firstly, you need to custom design the Pergola to fit your yard and it should be directly under the sun for most of the time.

The roof trusses have to be designed so that solar panels can be installed easily. The type of timber used has to be of high quality so it will last a long time.

The solar panel roof is to be made water proof so it can offer shade when it rains. You can use metal roofing and attach the solar panels to the ribs of roof. The general idea is to create a double function of the structure of the Pergola.

However, my main concern is the cost of constructing the Pergola. If the investment is too high, it wouldn’t make any economic sense to go ahead with it.