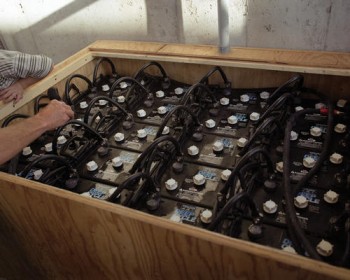 If you are planning to use solar energy to reduce your home power requirement, one of your largest investment would be on the battery bank.

The bank will be used to store the power generated by the solar panels. The number of battery needed will depend of your power requirement.

The type of battery most suitable for a residential solar power system is the deep cycle type. Since you will be investing a large amount of money on the battery, it makes sense to take good care of them.

The following is a list of 5 tips to keep your deep cycle batteries in tip top condition.

If the battery is discharged to 50 percent everyday it will last twice as long as it would if it’s cycled to 80 percent discharge.

This may be a challenge during cloudy days with a solar power system. A solution is to recharge the battery bank using power from the grid.

Undercharging is a result of the battery being repeatedly discharged and not fully recharged between cycles.

If a battery is not recharged the sulfate material that attaches to the discharged portions of the plates begins to harden into crystals.

Over time this sulfate cannot be converted back into active plate material and the battery is ruined.

Sulfation is the number one cause of battery failure.

Overcharging mean charging the batteries even thought it reached its maximum charged capacity. The result in severe water loss and plate corrosion.

5) Use a bigger battery bank.

When you are setting up a battery bank, have more battery units than what you’ll need. With a bigger battery bank, it will reduce the amount of power discharged before recharging.

If the weather at you home has more cloudy days, you may not have sufficient charging time. A large battery bank will provide sufficient power for your requirement.

When you have invested a large amount of money on the battery bank for your residential solar power system, you want to make sure you spend some time maintaining it.

Not everyone knows how to maintain a battery properly. I did the research on the web and the best manual that I found on deep cycle battery care is the “Electric Golf Cart Battery Guide” from www.golfcartbatteryguide.info.

It also offers the best value for money. The e-book is selling for only $19.95!

If you are keen to know how to take care of your deep cycle battery bank, check out the manual from the link below.