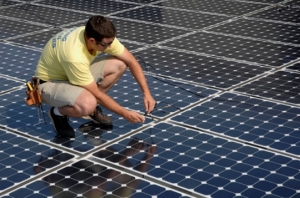 A solar panel or Photovoltaic (PV) panel is an interconnected construction of a set of Photovoltaic cells. The main function of a PV panel is to convert sunlight into electrical energy for use in commercial establishments and residential buildings.

The electric power generated using solar panels is called the ‘Photovoltaic effect’. Each solar cell is capable of converting sunlight into electrical energy. However, each PV cell can generate only a small amount of electricity in terms of total wattage, as each cell generates electricity of only 1 to 2 watts.

It is essential to combine several panels to generate sufficient amount of solar energy to supply power to an entire house. The natural benefit of a solar cell system is that it will enable production of large amount of electricity by assembling a number of solar cells to construct solar panels.

Another advantage with a PV energy system is that it can facilitate generation of additional units of electric power by simply combining more number of Photovoltaic panels.

There are different types of solar panels with numerous power generation properties and depend upon the type of material used to construct panels. Thin-films, mono-crystalline or polycrystalline components can be used to build solar cells. The thin-film solar cell comprises alloys (amorphous-silicon) that can be stocked in thin layers placed on a base.

It will be fairly elastic depending upon the ‘substrate’ utilized and is thus more suitable in specific conditions. In contrast, a mono-crystalline cell is developed from single silicon crystal rod and is, therefore, more sturdy.

The silicon rod is chopped into thin wafers so that a proper foundation is provided within which solar cells are developed. Polycrystalline solar cells are produced from various silicon crystals that are heated and later cooled in molds to produce ingots of silicon. The ingot is subsequently sliced into wafers and a cell is produced similar to thin-film solar cells.

The efficiency of a solar power panel installed at home is appraised by the ratio of the output to input electric power. The efficiency factor of PV panels normally varies from 10 to around 19 percent.

The cost of each solar panel will depend upon its efficiency rating. In order to obtain a higher efficiency rating in solar power generation, one has to spend more money for each panel. Those planning to install a new solar panel should compare the cost of installation with estimated savings in the long run due to higher efficiency factor so that they can make a suitable decision regarding the choice of Photovoltaic system. 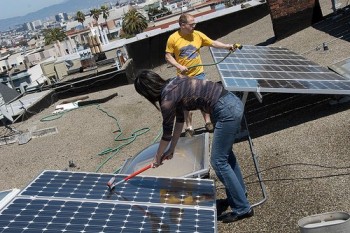 In order to choose the proper set of PV panels that meet his energy requirements, one should have a good understanding of certain specific parameters that could form the basis for making a decision. The major parameters that one should take into account in order to evaluate various solar panels comprise ‘efficiency’, ‘rated power at STC’ (Standard t Test Conditions) and ‘rated power per square foot’.

The rated power per square foot denotes the electricity generated from the solar panel at Standard Test Conditions per square foot of the panel’s surface area. The latest designs of home solar kits make the best use of sun light to generate electricity at peak efficiency levels and are now the most feasible choice to tap this type of renewable energy to meet energy requirements for residences.