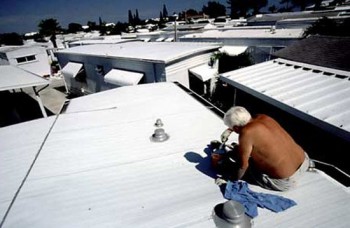 Not too long ago, there was a time when roofing contractors did nothing more than just to build and repair roofs of houses. However, as per the report by National Centre for Atmospheric Research or NCAR, roofing contractors are going to play a significant role in repairing not only the roofs of the houses, but the planet too.

Using a computer module, NCAR studied the future effect of climate change on urban areas and estimated as to how much the darker colored roofs and road surfaces absorb the sun’s energy. Dark colored surfaces like black roofing materials absorb more solar energy than the lighter colored ones and release the heat back into the atmosphere.

This phenomenon increases the temperature in the atmosphere, significantly and is the major cause for the Urban Heat Island Effect (UHIE), which makes the heavily populated city areas warmer than the nearby rural areas. You can take the example of London; due to Urban Heat Island Effect, the city experiences higher temperatures at night than the surrounding rural area, which are cooler by about three degrees.

Such a thing has much more effect in warmer climates and the air conditioning units work overtime to give people comfort, thus consuming more energy. According to the report of NCAR, if people paint their roofs white, they will do their bit in reducing the temperature of their cities.

The white colored roof are going to reflect most of the sun’s energy back into the atmosphere, absorb lesser heat and thus reduce energy consumption. Since the air conditioning units do not have to work overtime to keep the buildings cooler.

As a result, the environment is going to get benefitted immensely since, according to the findings of NCAR, the carbon emissions are going to get reduced drastically with every house in the world having a white colored roof.

If globally every house has a white colored roof, there is going to be a reduction in the emission of the harmful CO2 gases by 44 billion tones, every year. In other words, it is equivalent to the effect of not a single motor vehicle plying on the roads for 11 years.

The United States department of energy has already started painting the roofs of its departmental buildings with white color and though two million square feet got completed so far; the department is already experiencing energy savings worth half a million dollars, every year.

White color not only helps you to save money on energy spending, it is good for the environment too and even extends the life of your building roof by deflecting the Ultra Violet (UV) rays of the sun, which are harmful for the bitumen based roof materials.

However, if you reside in a cooler climate, painting your roof with white color can actually increase your energy consumption and carbon emissions. Since the white color keeps the building cool, you will require increased heating inside your building.

One more thing that you should remember is the location of the roof, since a white colored pitched roof within a city can divert Ultra Violet rays to the adjacent buildings thus increasing the energy consumptions of those buildings.

Overall, the concept of white colored roof is a good one; you should select to color your roof accordingly or in other lighter shades if you live in a warm climate, to do your bit for the environment. Just be careful with the location of your roof.

For more information on how to reduce your home energy consumption, check out the Earth4Energy download page. I’ve even written a short review about the program on this blog. Please read it to learn what it has to offer.