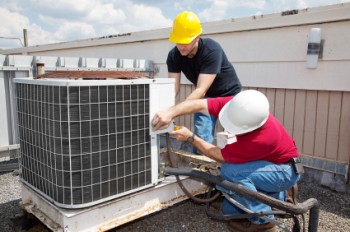 With ever increasing costs of electricity, reducing expenses on household electrical consumption is a top-most priority for many people. Many people necessarily use air conditioners during summer, which increase power costs considerably.

People can reduce the consumption of electricity, if they use fans for air circulation and reduce the room temperature rather than using air conditioners, provided if it is done properly. Following are some useful information regarding the usage of air conditioning units and electric fans.

What is Air Conditioning (AC)?

The function of any air conditioning, whether it is a central or whole house system or a window unit is to cool a space and maintain the room temperature or that of the house at cool and comfortable levels. The hot air from the atmosphere is drawn inside the system and passed through several stages and is blown across a ‘cold source’ to cool the air temperature inside the room and dehumidify the air.

On the other hand, the function of fans is different. Instead of reducing the air temperature in the room, the fans merely circulate the air, eventually cooling the room.

Despite the claims by the electric contractors that the energy efficiency of air conditioning units has improved considerably in the last decade, air conditioners still account for the maximum consumption of electricity in a house. An average American home incurs around 16% of the total electricity bill on air conditioners.

This percentage will go up to 60 – 70% during summer, particularly in the Deep South, where the efficiency levels are generally low due to high humidity. A typical window air conditioning unit consumes about 500 to 1400 watts. An average 2.5 ton central air conditioning system consumes around 3500 watts of power per hour if used regularly. This works out to hundreds of dollars per month.

As air conditioning units cool and dehumidify air in the room or house, they are much more effective in cooling than fans, which do not alter the surrounding temperature of a room, but bring down the room temperature and keep the room cool through circulation of air.

Though efficiency wise in terms of cooling air conditioners are far superior to fans, they lose out to fans in terms of power consumption. While a normal floor model of electric fan consumes 100 watts of electricity per hour, a ceiling fan consumes just 15 – 30 watts. The saving in energy costs is, therefore, enormous.

Can You Live Without AC?

Although air conditioning units consume a lot of power, it is still possible to achieve savings in energy costs and keep the electricity bills under reasonable levels. A major amount of power is consumed by the compressor and coolant pump.

However, A/C units also have fans that function without the usage of coolant. Adjusting the thermostat of the A/C units at higher temperature and the fan in the air conditioners at lower temperature will enable the fans to run more often than the cooling pump.

As it would take 35 floor fans to use as much energy as central air conditioning system, it would be better to install a few fans to utilize them as the main source of cooling and using A/C only when it is necessary. Even though using an air conditioner is a luxury, many Americans do not want curtail its use.

However, it is essential to reduce its use in order to cut down monthly expenses. According to one estimate, at least 50% saving can be achieved if electric fans instead of A/Cs are used. By utilizing judiciously both A/Cs and electrical fans, one can derive maximum benefit in terms of sufficient cooling and energy efficiency.